By The New York Times

As President Donald Trump presses for states to reopen their economies, his administration is privately projecting a steady rise in the number of cases and deaths from the coronavirus over the next several weeks, reaching about 3,000 daily deaths June 1, according to an internal document obtained by The New York Times, nearly double the current level of about 1,750.

The projections, based on government modeling pulled together in chart form by the Federal Emergency Management Agency, forecast about 200,000 new cases each day by the end of the month, up from about 25,000 cases now.

The numbers underscore a sobering reality: While the United States has been hunkered down for the past seven weeks, not

much has changed. And the reopening to the economy will make matters worse.

“There remains a large number of counties whose burden continues to grow,” the Centers for Disease Control and Prevention warned.

The projections confirm the primary fear of public health experts that a reopening of the economy will put the nation back where it was in mid-March, when cases were rising so rapidly in some parts of the country that patients were dying on gurneys in hospital hallways as the health care system grew overloaded.

“While mitigation didn’t fail, I think it’s fair to say that it didn’t work as well as we expected,” Scott Gottlieb, Trump’s former commissioner of food and drugs, said Sunday on the CBS program “Face the Nation.” “We expected that we would start seeing more significant declines in new cases and deaths around the nation at this point. And we’re just not seeing that.”

On Sunday, Trump said deaths in the United States could reach 100,000, twice as many as he had forecast just two weeks ago. But his new estimate still underestimates what his own administration is predicting to be the total death toll by the end of May — much less in the months that follow. It follows a pattern for Trump, who has frequently understated the impact of the disease.

The White House responded that the new projections had not been vetted.

“This is not a White House document nor has it been presented to the Coronavirus Task Force or gone through interagency vetting,” said Judd Deere, a White House spokesman. “This data is not reflective of any of the modeling done by the task force or data that the task force has analyzed. The president’s phased guidelines to open up America again are a scientific driven approach that the top health and infectious disease experts in the federal government agreed with.”

Gottlieb said Americans “may be facing the prospect that 20,000, 30,000 new cases a day diagnosed becomes the new normal.”

While the country has stabilized, it has not really improved, as shown by data collected by The Times. Case and death numbers remain stuck on a numbing, tragic plateau that is tilting only slightly downward.

At least 1,000 people with the virus, and sometimes more than 2,000, have died every day for the past month. On a near-daily basis, at least 25,000 new cases of the virus are being identified across the country. And even as New York City, New Orleans and Detroit have shown improvement, other urban centers, including Chicago and Los Angeles, are reporting steady growth in cases.

The situation has devolved most dramatically in parts of rural America that were largely spared in the early stages of the pandemic. As food processing facilities and prisons have emerged as some of the country’s largest case clusters, the counties that include Logansport, Indiana, South Sioux City, Nebraska, and Marion, Ohio, have surpassed New York City in cases per capita. 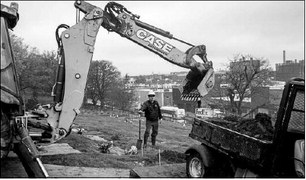 Janusz Karkos prepares a new grave at Green-Wood Cemetery on April 30in New York City, where gravediggers are working around the clock because of COVID-19.