The Great Depression created a massive growth in the federal government’s power.

The U.S. Supreme Court acceded to this expansion, especially after its ranks were filled by eight FDR appointments to the court.

One of their decisions allowed the federal government to order an Ohio farmer not to grow wheat on his own land, for grinding into flour for his own family’s consumption.

With that decision, practically anything could be swept under federal authority.

President Trump could have asserted the federal government’s right to preempt the states in the current health crisis. Federal laws permit quarantine and restrictions on travel for public health reasons, if the president (or his appointee at the Centers for Disease Control and Prevention) so order. The president’s powers in an emergency are immense.

Leaving the matter to the states allows some conflicts of policy. Rhode Island’s governor originally required New Yorkers to self-quarantine if they wanted to enter; after New York threatened to sue, she expanded the order to all out-of-state visitors. This issue will recur as some states come out of shelter- in-place before others, and people travel from the former to the latter. The CDC has issued guidance to all the states on when it is safe to terminate shelter-in-place orders.

The New Deal precedent would have allowed the CDC to make those rules mandatory, and uniform, for all states.

But President Trump has chosen not to follow FDR. Political critics contend that Trump has left responses to the vi-

rus to the states to avoid the risk of making unpopular decisions. Perhaps.

But harsh partisanship has infected discussion of our country’s response to the virus. An especially egregious example was Speaker Nancy Pelosi’s statement that the “president is asking people to inject Lysol into their lungs.” He never said that.

If we reject that kind of partisan misdirection, and judge the matter fairly, it might be recognized that states know their own varying conditions better than Washington does: including the virus’ spread, hospitals’ readiness and the economic harm suffered by social distancing state-by-state.

A preference for respecting the judgments of state governments, and individual citizens, over utilizing massive federal power ought to be applauded in the rare cases it is encountered in a president.

Since the states are in charge, are there limits on state governments’ abilities to order shutdowns?

This is a phrase the U.S. Supreme Court has used to describe all the powers a state has to improve its residents’ health, economic situation, education and even morality (the issue arose over anti-gambling laws). There is scant constitutional basis to restrict a state’s police powers. The U.S. Constitution is essentially a document that limits federal, not state, authority. The Ninth Amendment protects people’s rights other than those specifically stated in the Constitution, but it doesn’t identify those rights. The Tenth Amendment says any powers not delegated to the federal government are retained “by the States, respectively, or to the people.” It doesn’t tell us where the states’ powers start and the people’s rights end.

The Constitution requires states to preserve the “privileges and immunities” of citizens of the United States; but the court ruled in 1873, and has maintained ever since, that those privileges do not include the right to practice one’s profession or business. A state can’t take away property from individuals without “due process of law,” but that doesn’t prevent a state from shutting down a person’s livelihood to prevent contagion, the court held as early as 1824.

Americans must guard our liberties most assiduously in time of crisis.

However, courts are not our sole guardians. The most important protection we have is to choose a president and governor who respect our liberty.

Tom Campbell is a professor of law and of economics at Chapman University. He has written a text on the Constitution, “Separation of Powers in Practice.” He served five terms in Congress and two years in the California state Senate. He resigned from the Republican Party when it nominated President Trump, and is currently forming a new party in California, the Common Sense Party. 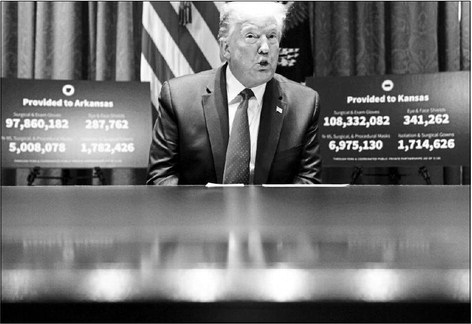 President Donald Trump speaks during a meeting with Arkansas Gov. Asa Hutchinson, and Kansas Gov. Laura Kelly, in the Cabinet Room of the White House, Wednesday, May 20, 2020, in Washington.