By The New York Times

Stay-at-home orders, school closures and social distancing greatly reduce infections of the coronavirus, but lifting those restrictions after just 30 days will lead to a dramatic infection spike this summer and death tolls that would rival doing nothing, government projections indicate.

The projections obtained by The New York Times come from the departments of Homeland Security and Health and Human Services. The models use three scenarios. The first has policymakers doing nothing to mitigate the spread of the coronavirus. The second, labeled “steady state,” assumes schools remain closed until summer, 25% of Americans telework from home, and some social distancing continues. The third scenario includes a 30-day shelter in place on top of those “steady state” restrictions.

The documents, dated April 9, contain no dates for when shelter-in-place orders were delivered nor do they contain specific dates for when spikes would hit. The risk they show of easing shelter-in-place orders currently in effect in most of the country undercut recent statements by President Donald Trump that the United States could be ready to reopen “very, very soon.”

The model foresees a bump in the demand for ventilators — considered a stand-in for serious COVID- 19 infection rates — 30 days after stay-at-home orders are issued, a major spike in infections about 100 days after and peaking 150 days after the initial order. (Assuming further shelter- in-place policies are not implemented to reduce future peaks.) For most states that implemented stay-at-home orders in late March, including New York City, Massachusetts and Illinois, that spike would come in mid- to late summer.

The government’s conclusions are sobering. Without any mitigation, such as school closings, shelter-inplace orders, telework and socially distancing, the death toll from coronavirus could have reached 300,000. But if the administration lifts the 30-day stay-at-home orders, the death total is estimated to reach 200,000, even if schools remain closed until summer, 25% of the country continues to work from home, and some social distancing continues.

If nothing was done, infection rates would top out at 195 million Americans, and 965,000 people would require hospitalization in an intensive care unit, according to the projections’ “best guess.” But with a 30-day shelter in place and other measures, infections would still reach 160 million and 740,000 would need intensive care.

The models show a higher demand for ventilators in the short term if states had never issued the stay-athome orders. But the spike in demand 150 days after lifting such an order is expected to be more severe than if the United States had never issued such orders and instead relied on school closures, sending people home to telework and directing the public to socially distance.

The federal agencies advised in the model that the projected demand for ventilators are “a worst-case scenario” and did not factor in states sharing the lifesaving devices across state lines.

Trump has teased the idea of reopening the United States to boost the economy, even as state governors, hospitals around the country and the federal government’s inspector general for Health and Human Services have warned of widespread shortages of test kits, protective gear and medical equipment.

“You see what’s happening and where we are and where we stand,” Trump said. “And hopefully we’re going to be opening up — you can call it ‘opening’ very, very — very, very soon, I hope.”

But economists say that lifting restrictions — particularly on nonessential businesses — will restore some activity to an economy that is currently in free fall, shedding jobs and contracting rapidly.

Many experts caution that growth will be slow when it returns because people will be wary of resuming normal activities before the country has far more extensive testing for the virus to help people assess the risk of contracting it if they leave their homes. Such a system appears nowhere close to deployment.

At a news briefing at the White House on Friday, Dr. Anthony Fauci, director of the National Institute of Allergy and Infectious Diseases, said that while he had not seen those projections, he assumed that whenever the restrictions are lifted there would be an increase in cases, which would heighten the need to be able to identity them, isolate them and trace them.

“When we decide at a proper time when we’re going to be relaxing some of the restrictions, there’s no doubt that you’re going to see cases,” he said. “I would be so surprised if we did not see cases. The question is how you respond to them.” 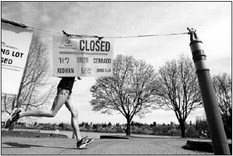 A jogger passes by a sign showing that a parking lot at Green Lake Park in Seattle is closed due to the coronavirus outbreak on Friday. New government projections indicate lifting stay-at-home restrictions after just 30 days may lead to a dramatic infection spike this summer.