By Teri Sforza and Tony Saavedra

Irvine is the financially healthiest big city in America, while New York is the sickest, according to a new study by a nonprofit dedicated to financial transparency in the public sector.

California’s other big cities fall firmly in the middle, with Southern California burgs healthier than many of their Northern California counterparts, says Chicago-based watchdog group Truth in Accounting.

The “taxpayer burden” — what each resident would have to pay to eliminate a city’s debts — hit $7,200 per

“Taxpayer burdens occur when politicians decide to make promises on paper without fully funding the programs on the balance sheet. The result is disingenuous to civil servants who are counting on many of these retirement programs, and a betrayal of future generations who may have to pay for them.” 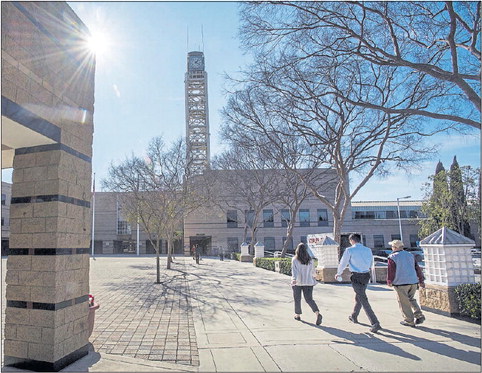 People walk across the Civic Center courtyard in Irvine on Tuesday. A study has ranked the city No. 1in financial health.

These figures reflect what cities owe their workers for public pensions and retiree health benefits that are guaranteed, but not funded.

That means old cities with their own police and fire departments are saddled with more unfunded debt — public safety pensions are the most expensive — than newer cities like Irvine, which contract out for many services. That means the newer “contract cities” carry little to none of the pension and retiree health care burden their elder compatriots shoulder.

“Taxpayer burdens occur when politicians decide to make promises on paper without fully funding the programs on the balance sheet,” TIA founder and CEO Sheila Weinberg said in a statement. “The result is disingenuous to civil servants who are counting on many of these retirement programs, and a betrayal of future generations who may have to pay for them.”

At the end of the 201617 fiscal year, 63 of the nation’s 75 biggest cities did not have enough money to pay all of their bills, the study found. The total unfunded debt of all of them combined is about $330 billion.

“This means that to balance the budget, elected officials have not included the true costs of the government in their budget calculations and have pushed costs onto future taxpayers,” the report says.

A new financial reporting rule kicked in for the 2017-18 fiscal year, requiring cities and states to report all unfunded “other post-employment benefits” — mainly retiree health care liabilities — on their balance sheets. Expect red ink to grow with the next reporting cycle.

Irvine was the top dog again, even though its taxpayer surplus declined from $5,200 to $4,400 since last year.

On the upside, “Very few U.S. cities are free of bonded debt, and Irvine is one of them,” the report said. But, there’s a downside, too: “The city’s unfunded pension debt increased by more than 25 percent because employer contributions and income earned from the pension plan assets did not keep up with the increase in benefits promised.”

In other words, the promised pensions are eating into Irvine’s surplus.

“Irvine is excited and proud to be the No. 1 city based upon fiscal strength for a third straight year,” said city spokesman Craig Reem. “This ranking indicates that we are working (on the next budget) from a place of strength.”

San Francisco remains one of the “Bottom Five Sinkhole Cities” with a taxpayer burden of $22,600, but that’s down $4,900 from the year before thanks to strong earnings on its pension plan assets. All told, the City by the Bay has $7.9 billion available in assets to pay $14.2 billion in bills, the report said.

Anaheim was just below the nationwide big-city average of $7,500 per person, with $1.2 billion available in assets to pay $2 billion in bills.

Los Angeles’ taxpayer burden of $6,000 decreased by $1,200 since last year, again because of good returns on its pension investments. The city has $12.7 billion available in assets to pay $20.4 billion worth of bills.

Santa Ana also doesn’t have enough money to pay its bills, with $296.2 million available in assets to pay $855.7 million in debt. Santa Ana officials had no comment.

Riverside is better off than many others, but still owes more than it owns. It had $778.8 million available in assets to pay $1.2 billion in bills. Riverside officials also declined comment.

Long Beach is in fair shape, with $2.9 billion available in assets to pay $3.1 billion in debt.

“Sinkhole” is not a designation city fathers much appreciate.

Anaheim says this analysis doesn’t offer a complete picture. The home of Disneyland has “enterprise districts” — an electric and water utility, as well as a convention center — that pay their own way with their own revenues.

‘Not a numbers game’

Truth in Accounting’s Weinberg is not sympathetic to the arguments made by the likes of Anaheim.

This is not just a numbers game, Weinberg stressed, it’s about the integrity of representative democracy itself.

“I worry about all the talk of surpluses I’m hearing from state and local governments. ‘We have extra money. Should we cut taxes? Increase salaries?’ Citizens don’t realize that, while officials are claiming to have balanced budgets and budget surpluses, they still have a pension credit card debt.

“If citizens cannot be informed and knowledgeable in the financial decisionmaking process — if they’re not told the truth about these numbers — it undermines our form of government,” she said.

Truth in Accounting is a politically unaffiliated organization that makes no policy recommendations beyond improving budgeting and accounting practices in a manner that enhances the public’s understanding of government finances, it says. 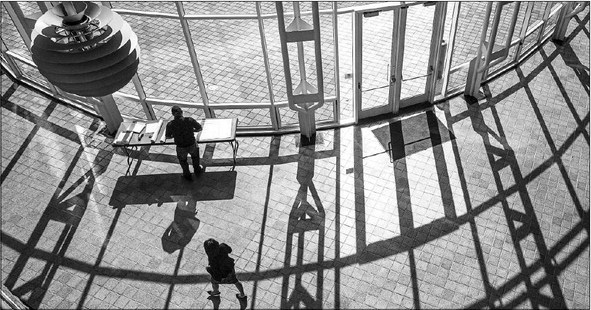 The Irvine Civic Center lobby on Tuesday. Irvine is one of several big cities in California that don’t have a “taxpayer burden” — what each resident would have to pay to eliminate a city’s debt. Truth in Accounting examined the nation’s 75largest cities, finding the average taxpayer burden was $7,500.